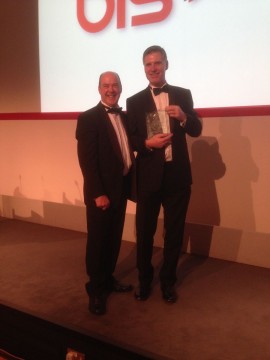 The CreaseStream Mini series has won The International Platinum Award for Design at The 2013 British Invention Show!

My team is thrilled at this new award, considering that such an accolade is usually bestowed upon companies who create solutions on a wider consumer scale. We were delighted to reach the Grand final and to collect such a prestigious award, sharing the lime light with Scientists, Professors and entrepreneurs, some of whom had developed potentially lifesaving and enhancing technologies.

The judges told us that we had 3 to 5 minutes to present our products and to explain why we felt they were inventive and innovative, and they were still with us 15 minutes later. I think they were impressed with how we had evolved our technology to develop a range of machines based on a simple rubber o-ring concept that had already served us so well to crease materials and combat the threat of cracking in the offset market. It helped that we could demonstrate the three mini machines, two of which required no electrical input, and could feed digitally printed sheets without using vacuum pumps, avoiding the problem of marking the sheets during transportation. Both judges seemed to appreciate how we packaged our products and included instant instructional video technology, something of which they hadn’t seen before.

We are the first company in our field to be using the instant play video technology to make installation and its use as easy as possible for our customers. The portable video in the card has a three hour battery life and works through magnetic connections, which only plays once this is disconnected through opening the cover. There is a USB lead included that connects the video card to desk top computers for easy recharging.